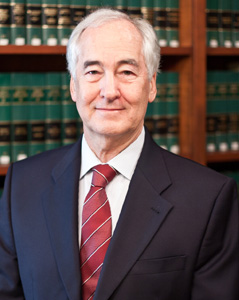 James Oliver “Jimmy” Carter was born in 1949 and grew up in Wilmington, NC.  A graduate of Wake Forest University (B.A. 1971; J.D., 1974), Jimmy was admitted to the North Carolina Bar in 1974, and he has been in private practice in Wilmington and southeastern North Carolina for thirty-six years.

Jimmy is admitted to practice in the North Carolina General Courts and the U.S. District Courts and U.S. Bankruptcy Courts for the Eastern and Middle Districts of North Carolina.  He served on the private panel of Chapter 7 Trustees from 1975 until 2000.  N.C. Business Magazine listed Jimmy as one of the Legal Elite in Bankruptcy between 2002 and 2006, and he has also received honors from Corporate Counsel Magazine.